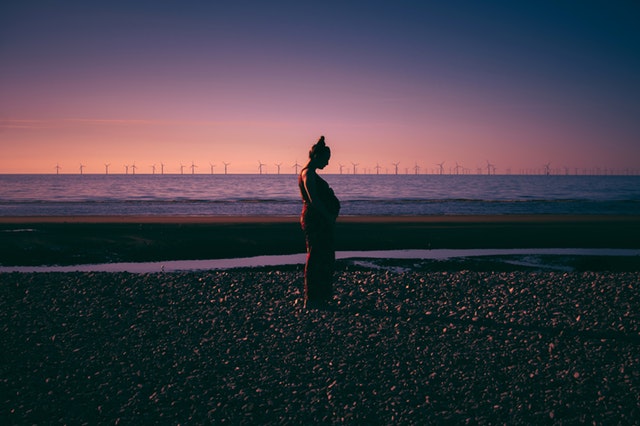 The most common early signs and symptoms of pregnancy might include:

Missed Period :
If you're in your childbearing years and a week or more has passed without the start of an expected menstrual cycle, you might be pregnant. However, this symptom can be misleading if you have an irregular menstrual cycle.

Tender, Swollen Breasts:
Early in pregnancy hormonal changes might make your breasts sensitive and sore. The discomfort will likely decrease after a few weeks as your body adjusts to hormonal changes.

Nausea With Or Without Vomiting :
Morning sickness, which can strike at any time of the day or night, often begins one month after you become pregnant. However, some women feel nausea earlier and some never experience it. While the cause of nausea during pregnancy isn't clear, pregnancy hormones likely play a role.

Increased Urination :
You might find yourself urinating more often than usual. The amount of blood in your body increases during pregnancy, causing your kidneys to process extra fluid that ends up in your bladder.

Fatigue :
Fatigue also ranks high among early symptoms of pregnancy. During early pregnancy, levels of the hormone progesterone soar — which might make you feel sleepy.

Other pregnancy signs and symptoms

Other less obvious signs and symptoms of pregnancy that you might experience during the first trimester include:

Moodiness :
The flood of hormones in your body in early pregnancy can make you unusually emotional and weepy. Mood swings also are common.

Bloating :
Hormonal changes during early pregnancy can cause you to feel bloated, similar to how you might feel at the start of a menstrual period.

Light spotting :
Sometimes a small amount of light spotting is one of the first signs of pregnancy. Known as implantation bleeding, it happens when the fertilized egg attaches to the lining of the uterus — about 10 to 14 days after conception. Implantation bleeding occurs around the time of a menstrual period. However, not all women have it.
Cramping. Some women experience mild uterine cramping early in pregnancy.

Constipation:
Hormonal changes cause your digestive system to slow down, which can lead to constipation.
Food aversions :
When you're pregnant, you might become more sensitive to certain odors and your sense of taste might change. Like most other symptoms of pregnancy, these food preferences can be chalked up to hormonal changes.

Nasal congestion :
Increasing hormone levels and blood production can cause the mucous membranes in your nose to swell, dry out and bleed easily. This might cause you to have a stuffy or runny nose.


When do the symptoms start?

In general, notable pregnancy symptoms such as nausea and fatigue won’t be noticeable until weeks six or eight. However, you could be beginning to feel the joys of pre-motherhood around week five. At three weeks of pregnancy, you are around the implantation stage and could notice a bit of spotting to do with the egg displacing uterine lining when it places itself in the uterus. Around this time you could feel fatigued, tender breasts, nausea, heightened sense of smell, food aversions, and frequent urination.

seo pormotion March 7, 2020 at 5:10 AM
This comment has been removed by a blog administrator.

Unknown March 7, 2020 at 8:49 AM
This comment has been removed by a blog administrator.

This is my first time visit to your blog and I am very interested in the articles that you serve. Provide enough knowledge for me. Thank you for sharing useful and don't forget, keep sharing useful info: Pregnancy test strips

Really I enjoy your site with effective and useful information. It is included very nice post with a lot of our resources.thanks for share. i enjoy this post. حوامل

This is such a great resource that you are providing and you give it away for free. I love seeing blog that understand the value of providing a quality resource for free. حوامل

Let's start with question number one, "What is the difference between ADD symptoms and ADHD symptoms, anyway?" People kept asking me that... alzheimer

I wanted to leave a little comment to support you and wish you a good continuation. Wishing you the best of luck for all your blogging efforts. uplifting news network

Allowing regular users to create and edit any page in a Web website online is interesting in that it encourages democratic use of the Web and promotes content material composition by nontechnical customers.wikipro

Thanks for this great post, i find it very interesting and very well thought out and put together. I look forward to reading your work in the future. Political Economy

That is the manner by which state-of-the-art things have gotten and we have never been more in contact with the goings on the planet, than we are today. websitepin site

Great things you’ve always shared with us. Just keep writing this kind of posts.The time which was wasted in traveling for tuition now it can be used for studies.Thanks SEO Company Vancouver

I have read a few of the articles on your website now, and I really like your style of blogging. I added it to my favorites blog site list and will be checking back soon. Please check out my site as well and let me know what you think. حوامل

It should be noted that whilst ordering papers for sale at paper writing service, you can get unkind attitude. In case you feel that the bureau is trying to cheat you, don't buy term paper from it. todaytopnewslive com

You actually make it look so easy with your performance but I find this matter to be actually something which I think I would never comprehend. It seems too complicated and extremely broad for me. I'm looking forward for your next post, I’ll try to get the hang of it! www.todaytopnewslive.com/netflix/

I’m excited to uncover this page. I need to to thank you for ones time for this particularly fantastic read!! I definitely really liked every part of it and i also have you saved to fav to look at new information in your site. https://todaytopnewslive.com/netflix/coming-soon-to-netflix/

If you don"t mind proceed with this extraordinary work and I anticipate a greater amount of your magnificent blog entries https://todaytopnewslive.com/netflix/netflix-news/

To find out what the continuing medical education (CME) requirements for your medical license in Florida, Texas, New York, California and other states. Continuing Medical Education Requirement

Very informative post! There is a lot of information here that can help any business get started with a successful social networking campaign. https://www.theplaynews.com/

I really enjoy reading and also appreciate your work. Pregnancy

It has fully emerged to crown Singapore's southern shores and undoubtedly placed her on the global map of residential landmarks. I still scored the more points than I ever have in a season for GS. I think you would be hard pressed to find somebody with the same consistency I have had over the years so I am happy with that. PREGNANCY

One of the most punctual paranoid ideas and maybe the granddaddy of all is the New World Order otherwise called the One World Government.wikipro

I like viewing web sites which comprehend the price of delivering the excellent useful resource free of charge. I truly adored reading your posting. Thank you! custom lapel pins

A good blog always comes-up with new and exciting information and while reading I have feel that this blog is really have all those quality that qualify a blog to be a one https://netflixgoogledocs.blogspot.com/2020/10/dr-beauty-cosmet.html

The web site is lovingly serviced and saved as much as date. So it should be, thanks for sharing this with us. https://todaynewsnetworkin.blogspot.com/

Really appreciate this wonderful post that you have provided for us.Great site and a great topic as well i really get amazed to read this. Its really good. custom lapel pins

The good news is that it is so much easier now with all of the new technology to succeed in your own business. The main thing you will need is the will and desire, that burning desire to create, to build and to win. https://www.ferdouse.com/

One is made as a shut circle, between the knees and goes before the chest zone. Best Pillow sham

You will found here lots of helpful, important, essential tips and information about baby, baby products, and Parents. Love for babies